Two-point-spread nail-biter bouts unquestionably are the most exciting, but there is something to be said, too, for watching the home team show its power, and the Corporal Punishers, the senior roller derby team of the Jerzey Derby Brigade, did just that last night against the Strong Island Derby Revolution. In the first jam Maggy Kyllanfall slipped swiftly through the pack to put the Punishers in the lead. The team never relinquished it.

The Punishers’ jammers, particularly Maggy Kyllanfall, Heinz Catchup, and Baked Beans, have gained a lot in speed and sure-footedness since I first saw them on the track; they are fast by any measure, and not just when in the clear. They deftly exploited openings in Revolution’s defenses, sometimes barely slowing down while doing it. The improvement in the Punishers' blocking in the past couple years – won from practice and experience – has been just as notable. Time and again last night Punisher blockers (one of them often Raven Rage) would double-team a Revolution jammer, impeding her while the other two blockers (one of them often Doom Hilda) helped open a path for the jammer. They effectively contained the damage during Revolution power jams as well (a “power jam” is when an opposing jammer is in the penalty box, which provides a one-sided opportunity to score points).

Once again, none of this was easy. Revolution blocking also was competent and forceful. An ability to exploit openings and score points was on display from Revolution jammers – notably Jenny from the Block #13, Serial Mom, and, most especially, Trinity. Even when a Punisher jammer broke through the pack first, Trinity showed a talent for breaking out and closely pressuring the lead jammer; this repeatedly limited Punisher point totals by inducing the Punisher jammer to call off the jam. (The lead jammer has the option to terminate a jam.) At half-time the score was 96-42 in favor of Punishers.

Halftime activities at the bouts are as varied as Forrest Gump’s chocolates. In the past they have included barbershop quartets, rock bands, and students from a dance. Last night there were belly dancers. Unlike those students, the ladies did use their arms – and everything from veils to a lighted hula hoop. They were crowd-pleasers.

In the second half of the bout, the aggression on the track went up. The hits were harder and more frequent. This frequently happens in bouts as one team or the other strives to catch up. Revolution narrowed the gap to 15 points, helped especially by a power jam by #13. Anita Chainsaw in the next jam then re-expanded ’s edge, and the Punishers built on the lead. In the very last jam of the night Anita Chainsaw added more points to the scoreboard for a final 192-92 Punisher win.

The difference in the performance of the two teams was much narrower than the final score indicates. Strong Island Derby Revolution is a very competitive team which never eased up on its pressure; if a few events had happened a little differently (e.g. another mix of players in the penalty box at key moments) the outcome could have been different as well. Furthermore, they are armed for next time with experience of the Punishers’ strengths and weaknesses. I’m already looking forward to a rematch

(Note: for an explanation of derby rules and terms, see video at the end of an earlier post: http://richardbellush.blogspot.com/2011/04/wheel-appeal.html ) 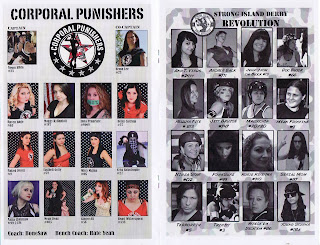 Posted by Richard Bellush at 10:24 AM