Why I Love Morticia Addams

I refer to the Carolyn Jones version rather than the Angelica Huston. I could say simply that she is beautiful, feminine, unconventional, passionate, and open-minded -- she once urged tolerance of the neighbors despite their ghastly taste for petunias. She possesses that special way with carnivorous plants. What’s not to love? But there is more.

TV in the 50s and early 60s was more innovative than we commonly remember – perhaps because few of us are old enough to remember. Playhouse 90 and similar programs offered new original screenplays with no recurring characters every week. Alfred Hitchcock Presents, One Step Beyond, and the Twilight Zone still hold up if seen today. The comedy show of Ernie Kovacs was truly off-the-wall. However, the sitcom genre was another matter. It was family-friendly with a vengeance: Donna Reed, Leave It to Beaver, Make Room for Daddy, Ozzie and Harriet, and the like. There was and is nothing wrong with shows of this type, of course, except for the fact that these were the only images of domesticity presented in that format prior to 1964.

The Addams Family, based on the macabre cartoons of Charles Addams, was something different. It was marvelously subversive. The show very much reflected the 60s social revolution in a way that its obvious competition, The Munsters, did not. (Beneath the make-up and décor, the Munsters had solidly Ozzie and Harriet values.)

I loved the very first episode of The Addams Family, which aired on September 18, 1964, and at age eleven I also was smitten by the seductive lady in black. The Addams Family stood ordinary conventions on their heads, as in one early episode when Morticia finds a baseball glove in her son’s closet and holds it up at arm’s length by two fingers, as appalled as another mother might be by drug paraphernalia. The characters are not merely oddballs, they are seriously dangerous. They serve their guests henbane tea. They casually contemplate murder and suicide. Their children literally play with dynamite. The sensual interaction of Morticia and Gomez was then, and remains today, something unseen among other sitcom couples; modern shows have much more randy jokes and frequent direct references to sex, but that is very far from the same thing. The Addams household defies (along with all social norms) property maintenance regulations, zoning regulations, weapons regulations, safety regulations, and just about every other kind of busybody reg to which the rest of us long have been resigned.

The family remains likable for all that, even if it is advisable to decline the offer of tea when you visit. Here were some folks who definitely did not live by the standards of the Cleavers, and yet they were deeply appealing. They still are, and the point is still a valuable one.

I purchased all four seasons of the series on DVD. I enjoy each episode as much as when I was eleven, and my crush on the long haired beauty with the lovely gray pallor remains unbroken. 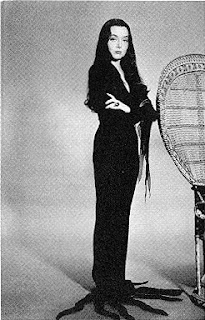 Posted by Richard Bellush at 12:44 PM